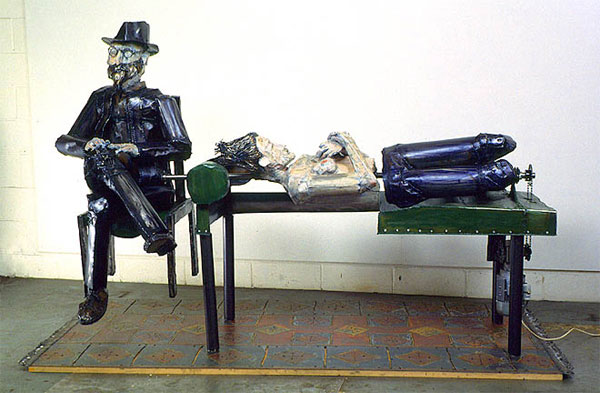 Freud – White Sacrifice was commissioned and exhibited in a group show alongside work from automata artists selected by the film director Terry Gilliam. The show was to celebrate objects from this millennium in preparation for the next.

The brief for the show was set by Terry Gilliam who chose objects that he thought had most affected the lives of people during the 20th century. My ‘object’, which was picked out of hat, was a post card of Freud’s psychiatrists couch. Freud – White Sacrifice is trying to show letting go, madness. Two people freaking out over inner feelings and yet they are in a room, a confined space both fixed to a chair and a couch in close proximity.

It has always stuck me that the positioning of the chair in relation to the couch is peculiar. A situation that is supposed to be intimate but in reality is quite the reverse. As the psychiatrist listens to the patients problems he is pretending not to be there whilst the patient is at the same time desperately trying to reveal their inner most feelings.

I would like to show in my work that the psychiatrist’s couch is an area where you can freak out and let your hair down.

Psychoanalyses is a modern tonic and is particular to Westerners / white people.