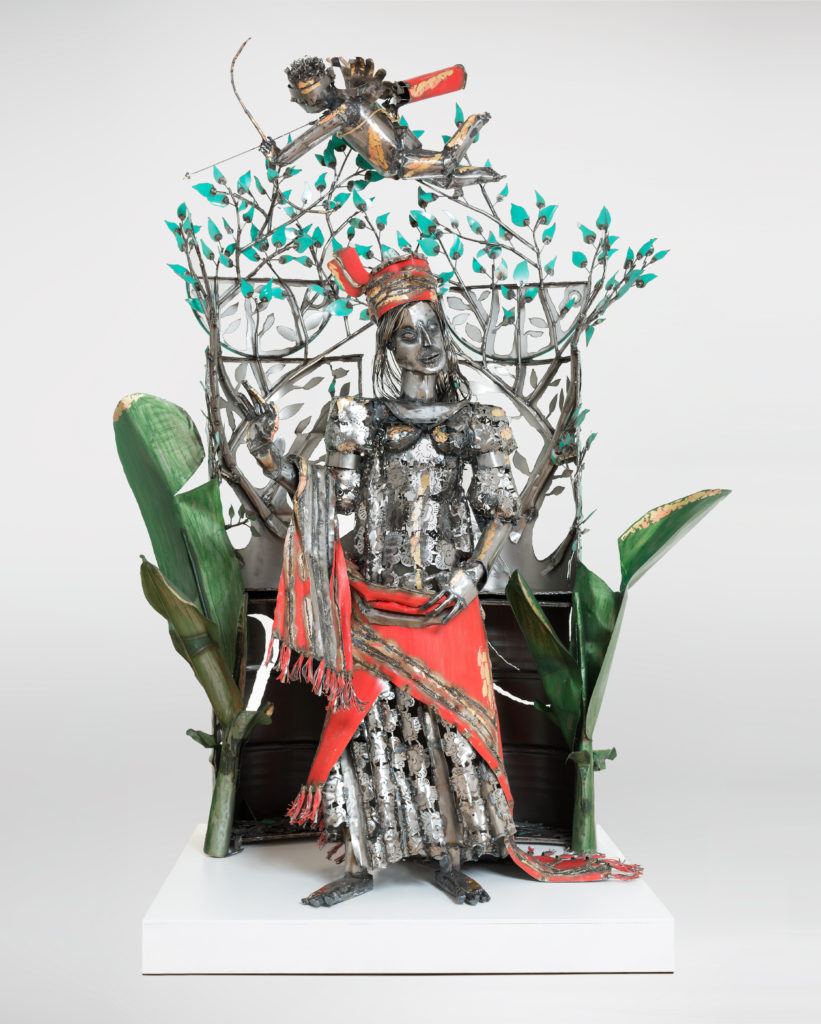 Blind Love and Grace was part of the Primavera exhibition at the October Gallery in 2016.

The reinterpretation of a section of Botticelli’s painting. Created with oil barrels, cut in half then and opening up revealing Grace. A figure dressed in lace and a red shawl, looking like a West African lady but with the style of a renaissance figure.

The barrels are broken into branches that fan out to create an environment a  forest and light behind the figure of Grace. She holds up her hand as if blessing or giving benediction to the viewer. Banana trees balance the stage either side of her and a fat cherub pointing his arrow in readiness to pierce someone’s heart flies above. Everything is made of steel but they all seem light. 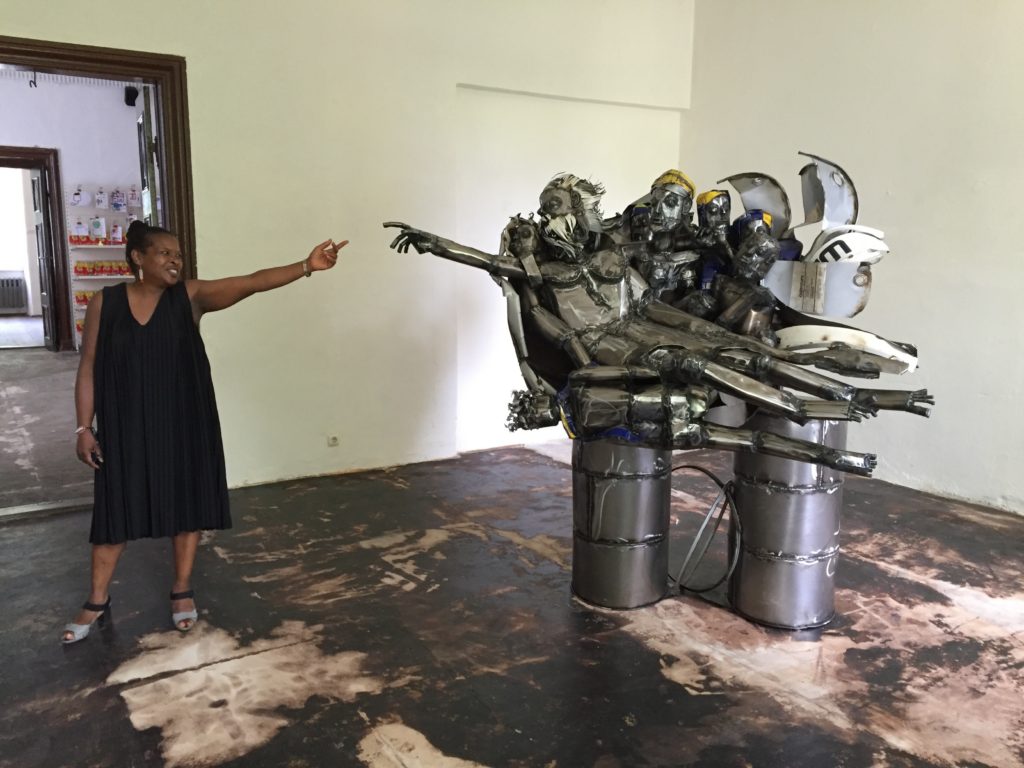 This sculpture was created for an exhibition ‘Between the Worlds’ Schloss Roskow Germany in response to the UN Convention on the Rights of the Child. Creating or acknowledging a new law is like creating new people. Our behavior and aspirations should change because of these new laws. A new law supporting children all over the world is a good start to a better future.

At the moment I am very inspired by ancient art from Italy Botticelli, Michael Angelo and so on, looking at iconic images from the Sistine chapel I was attracted to the painting of God creating Adam, I love the hand gesture of this composition as so many people recognize it. Interpreting this in steel, I have decided to concentrate on god and his cloak of cherubs and people. Was Michael Angelo trying to express how complex God is? Anyway my rendition is god with children in his cloak. His hand is out stretched. Once installed, I hope viewers will adopt Adam’s iconic pose of almost touching God.

My sculptured god and his children are created from recycled oil barrels and olive oil cans, oil is wealth, anointed in oil, are these children good or bad? Is oil bad? It was created by God (if you believe in him).

My hope is to create a layered work that is contemporary but has a core of Western art history. 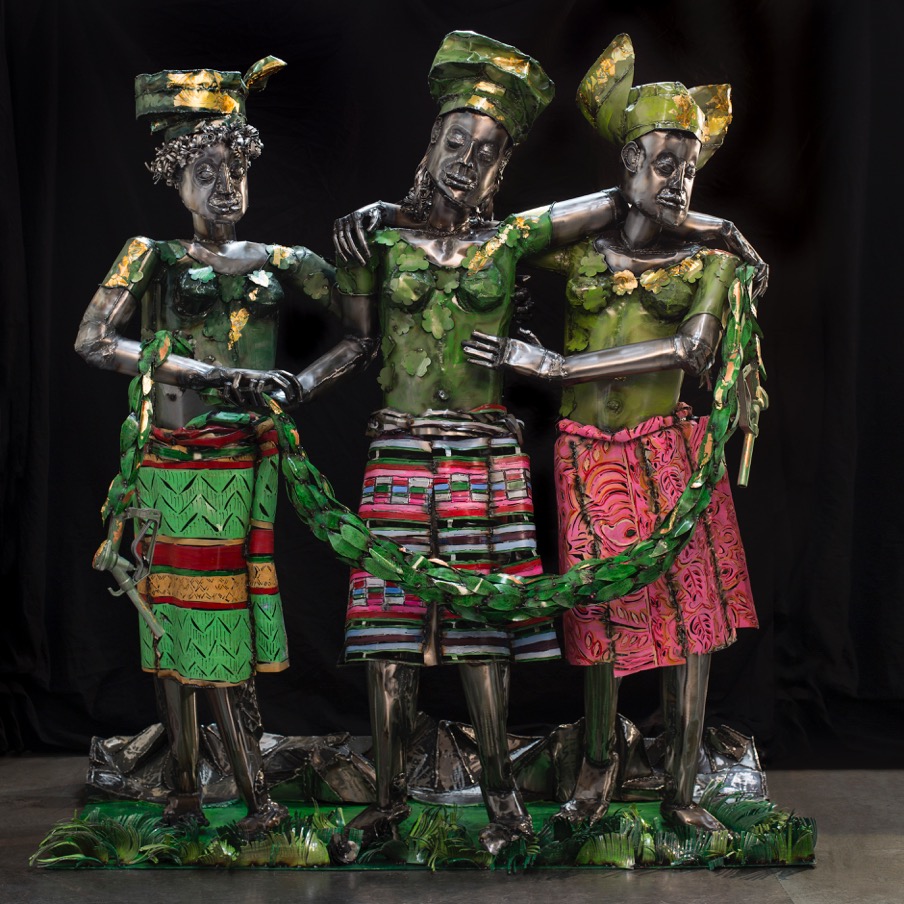 This piece was inspired by a drawing by William Blake with the same title, I have Africanized the figures; dressing them in cloth that could come from different parts of the world, echoing; Asia a paisley motived fabric, then a Mondrian pattern that looks like sleek building blocks to represent Europe and a woven cloth with an Igbo pattern for Africa. The women have gele head ties (this fabric is produced in Switzerland). The three graces represent women in the world resting on their laurels as humankind is holding a wreath which ends with a petrol nozzles; their back drop is mountains and they stand gracefully on a cushion of lush grass and flowers.  I really enjoyed working with Blake’s sketch making sure the figures stood and touched as they do in his drawing. I think the work is international and conscious of our humanity and the coercion in working with each other and not caring for the environment. Business as usual? 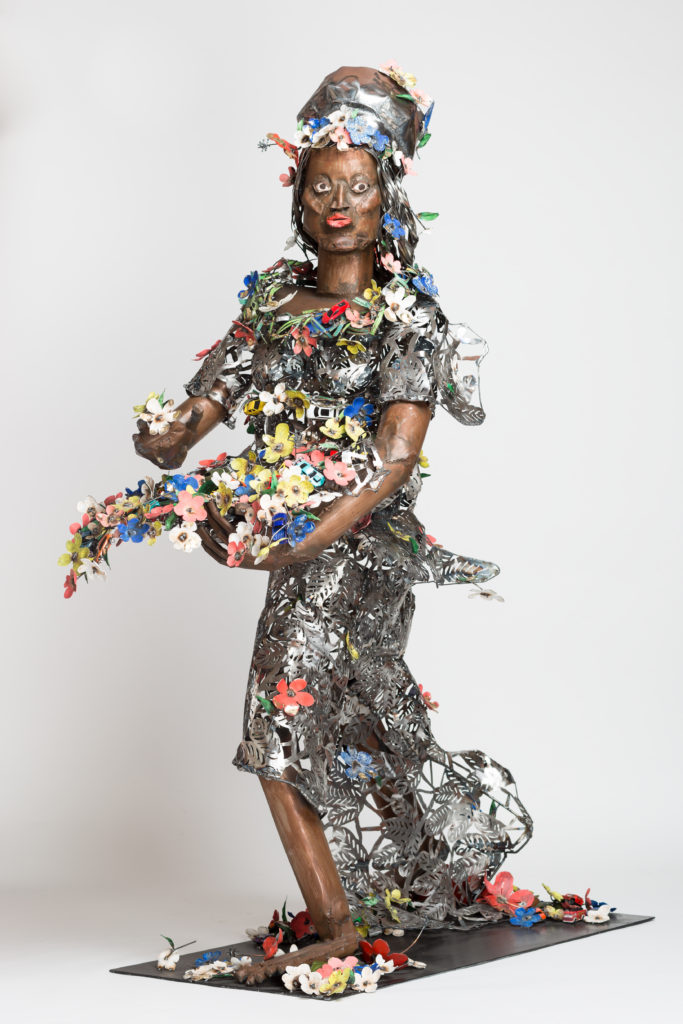 Botticelli painted ‘Primavera’ and one of the women in the painting is Flora Primavera is a painting about Spring, the entire piece (Allegory of the Spring) to which Vasari gave the name Primavera – some 70 years after Botticelli finished it.

Most people recognize the word ‘Primavera’ as something to do with spring, without knowing all the facts. I have approached this work intuitively. The idea of spring, flowers, so bright and colorful that they look like sweets, mixed with new toy cars, that my nieces children play with. Materialism and a clash of the past and the present. My sculpture carries flowers and toy cars that she seems to be collecting or giving away.

When I look at Botticelli’s painting the beautiful people their fine clothes wealth and fantasy is so compelling. Primavera (the sculpture) is a visual image with a twist. 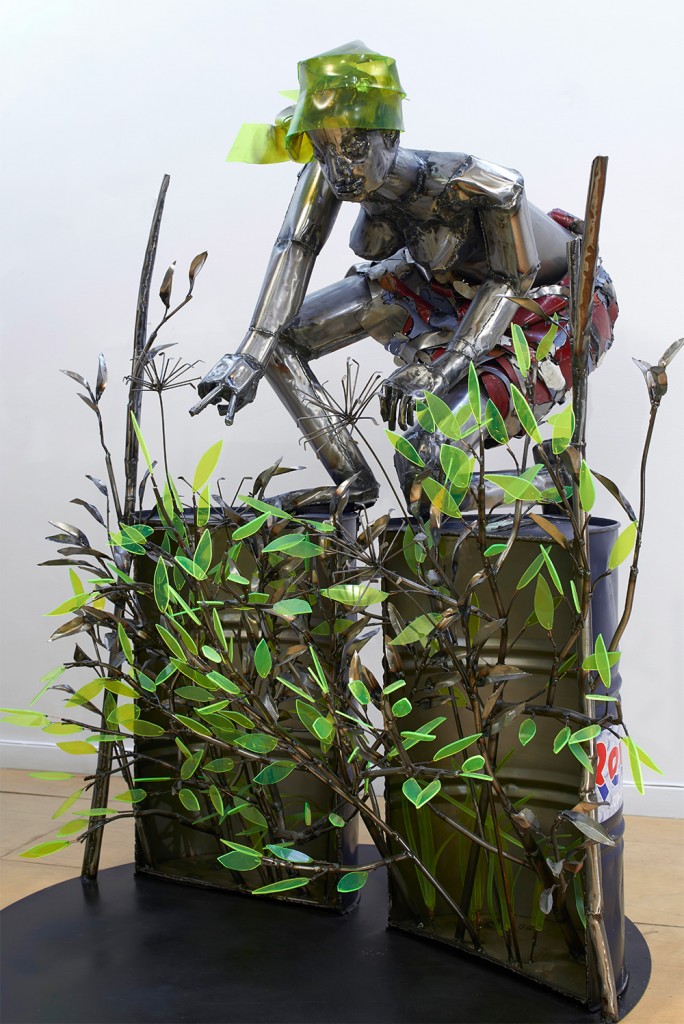 I am very conscious that my home in Niger Delta is in a very bad place at the moment because of pollution and lack of employment. I work hard, thinking of positive things that could happen – I feel that the negatives are so big that if we talk about them all the time we will have nothing to look forward to. Funnily enough , this brings out humour in the work I make.

William Blake has a drawing of a figure that looks as if it is creating the world; Urizen- I like this drawing . I love poses done with hands and bodies by rap stars and foot ballers. Far from Blake but not so far. Anyway my’ god’ is a woman, she is creating growth from a split oil barrel, Her lower half is covered by smurf pattern. I did not want to go down the path of ‘ African’ material.

There was an article in the times newspaper of a roman sculpture that had been found off the coast of Gaza, a fisher man found it caught in his net and got his friends to use their boats to drag it to the beach. When they finally got it onto dry land, some cultural police came along and said the sculpture was against Islam and then some other police came along and said it should not be seen by anyone because it was an abomination. There was a little photograph of this sculpture and it was resting on a mattress which had a pattern of the Smurfs.

Very often when you see tragedy or something very serious there is a commercial light thing in the same picture. People in temporary housing with a Mickey mouse poster keeping their shelter intact. A fierce Taliban fighter hiding his identity with a picture of Britney hanging off a wall…..

Kissss me came about because I spent a summer holiday with my girls in Italy and I was kissed and loved by them both! They were sporting bright red and livid pink lipsticks and were lovely to watch. I wanted to catch this happiness. 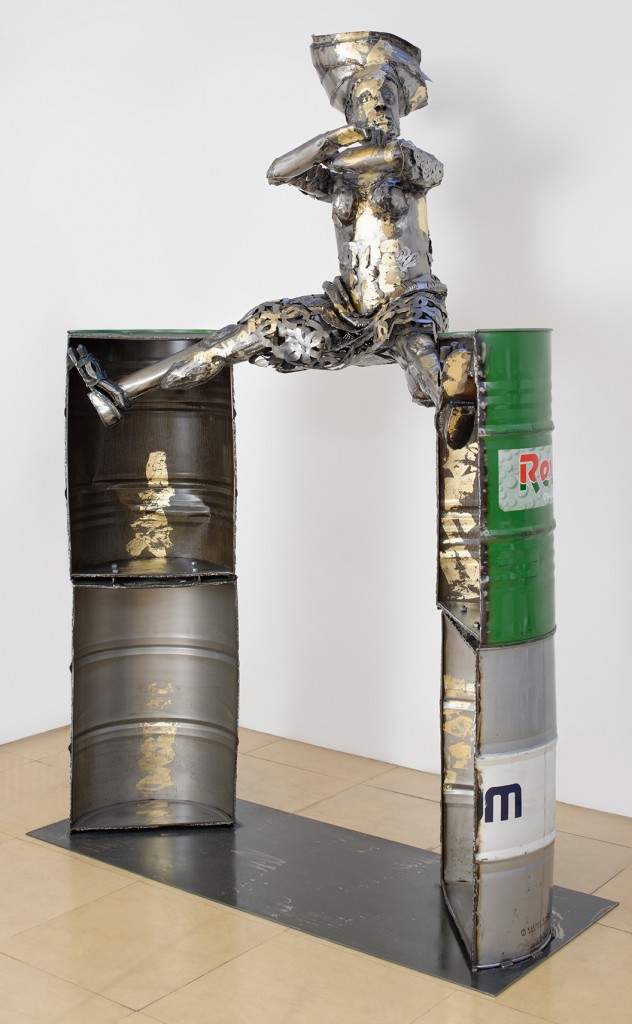 I was not sure what sort of title to give this piece ‘ All that glitters …pretending.’ I wanted to continue making works like ‘Jesus loves me’ figures in Hip-hop and R&B poses. I came across a photograph of an east London Asian boy with his arms folded and his legs in a splits position in a church door way and I thought it was so striking. Full of bravado and also history in that it could be a pose from some traditional religion but the person performing it was in jeans with his T-shirt off, twisted into his pocket.

Anyway I love the ‘balls’ of successful Nigerians and the theme of showing off seemed like a good idea for this work to follow. The glittering woman is not only glittering she is showing off being invincible, astride sliced oil barrels. Cool. And a little funny. Could this be a description of Nigeria at this time? I am trying to look at the positives in life. 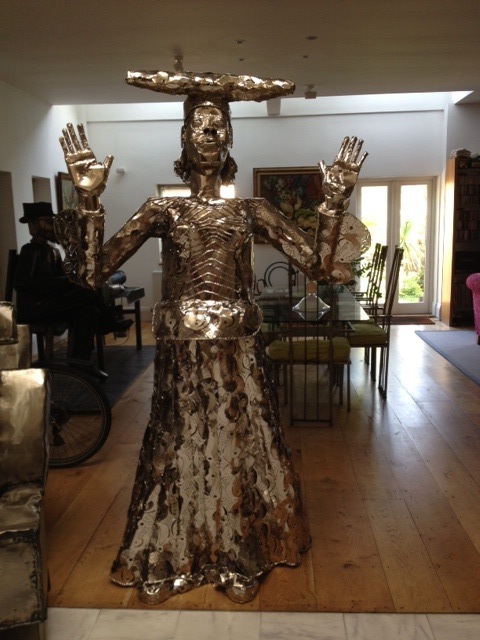 This sculpture features Victorian influenced clothing in Namibia, the hands are saluting or surrendering to the viewer is so intriguing. Pattern making and posing is an important element of this work, because the Herero people were forced into wearing this form of clothing. But they made it their own by adding head wear that is fashioned into the form of cow horns, something that they admire. ‘Looking for grace’ faces the viewer with the history and culture of Namibian people. The artist has used this pose in the search for the sublime. 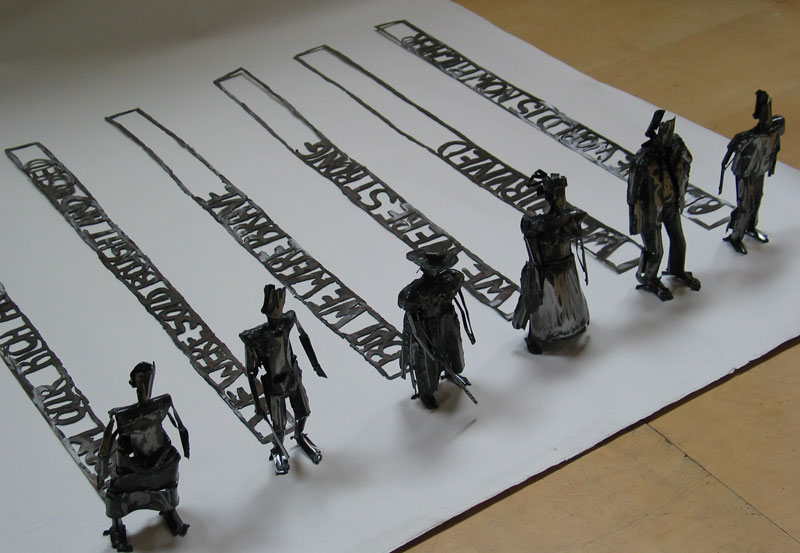 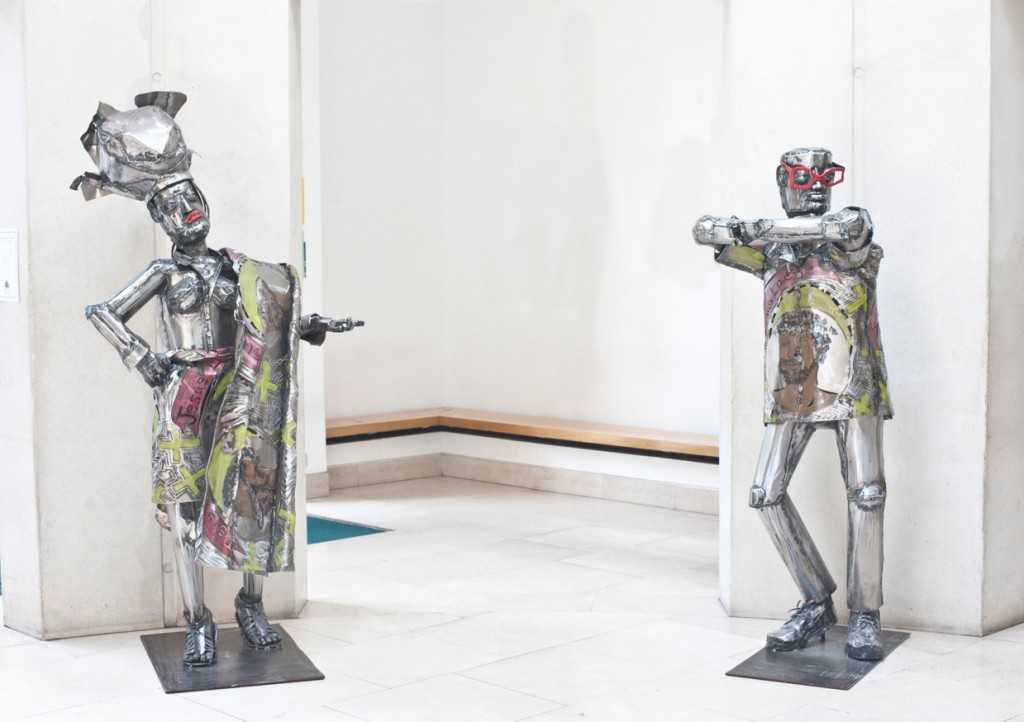 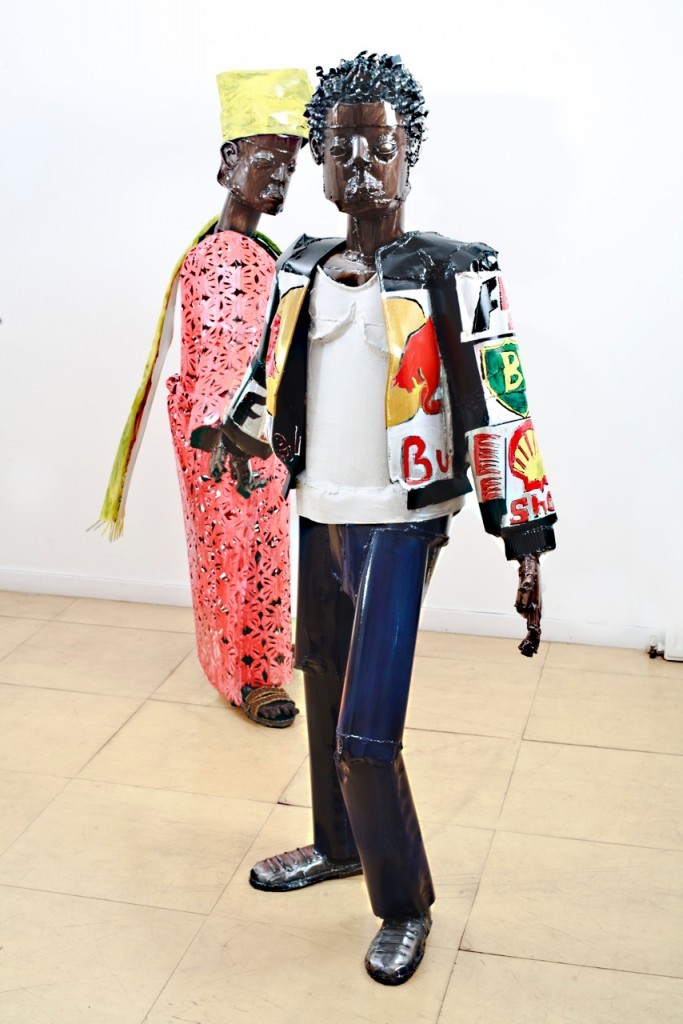 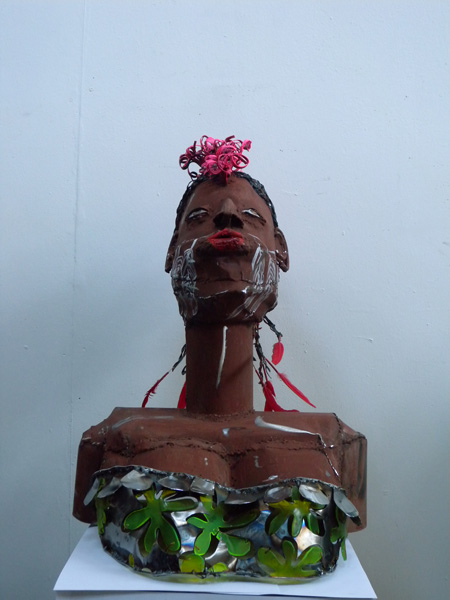 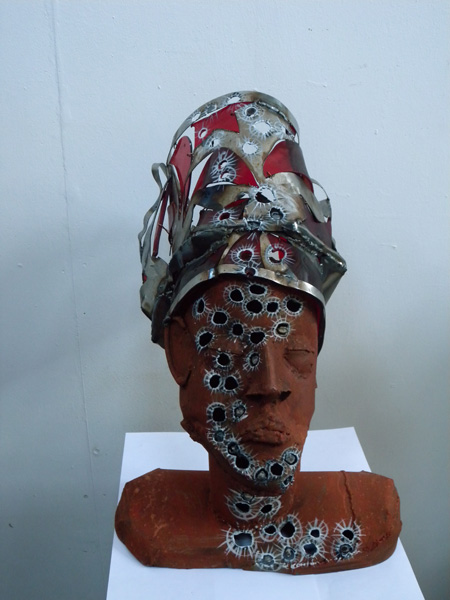