All the World is Now Richer – Great hall 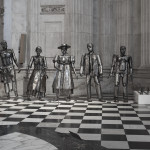